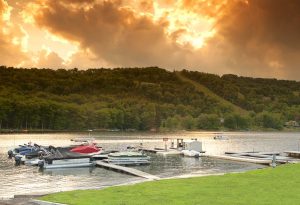 Nestled high in the mountains of Garret County, Maryland, Deep Creek Lake is only a 2- to 3-hour drive from the metropolitan areas of Baltimore, Maryland, Washington, D.C. and Pittsburgh, Pennsylvania. At 12 miles long with 65 miles of shoreline, Deep Creek Lake is the largest freshwater lake in the state of Maryland. Often called the “Lake Tahoe of the East” because the climate is so similar to the famous lake straddling the Nevada and California borders, Deep Creek Lake has become one of the premiere four-season resorts of the mid-Atlantic seaboard.

Deep Creek Lake is fed by natural underground springs, and as result it has some of the clearest water of any lake in the Eastern United States. Deep Creek Lake has an average depth of 25 feet with the deepest point in the lake reaching roughly 75 feet. With an elevation of 2,462 feet above sea level, the temperatures at Deep Creek Lake will generally be 5 to 10 degrees cooler than the lower surrounding metropolitan areas.

From March through May the average daytime temperature reaches approximately 45-degrees Fahrenheit with lows dipping into the 30s. Rainfall during the spring months averages approximately 10 inches. 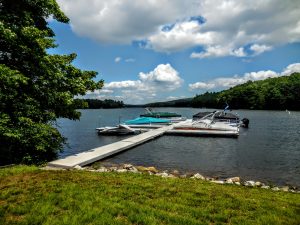 Summer temperatures, from June through August, will generally range from the lower 70’s to middle 80’s with an average water-surface temperature of 73 degrees Fahrenheit. This makes the lake a great spot for people looking for a place to beat the summer heat and humidity of the city. Deep Creek Lake receives approximately 4 1/2 inches of rain per month during the summer. The average warmest month is July and the highest temperature every recorded was 97 degrees Fahrenheit in August of 1988.

From September through November the temperature averages 62-degrees Fahrenheit during the day with lows dropping into the upper 30s to lower 40s at night. Rainfall during the fall totals approximately 3 1/2 inches per month. 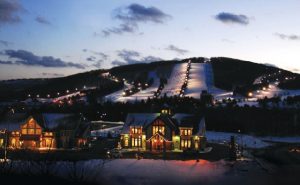 In December, January and February the average daily high temperature is 37 degrees Fahrenheit with an average nightly low of 17 degrees Fahrenheit. The area sees an average snowfall of 105 inches per year, almost twice that of Fairbanks, Alaska! In fact, some years Deep Creek Lake can experience over 200 inches of snowfall. Deep Creek Lake is also a popular spot for ice fishing, with the lake developing over 18 inches of ice cover during the winter months of January and February.

There are no upcoming events.

Your 5-Day Forecast at a Glance